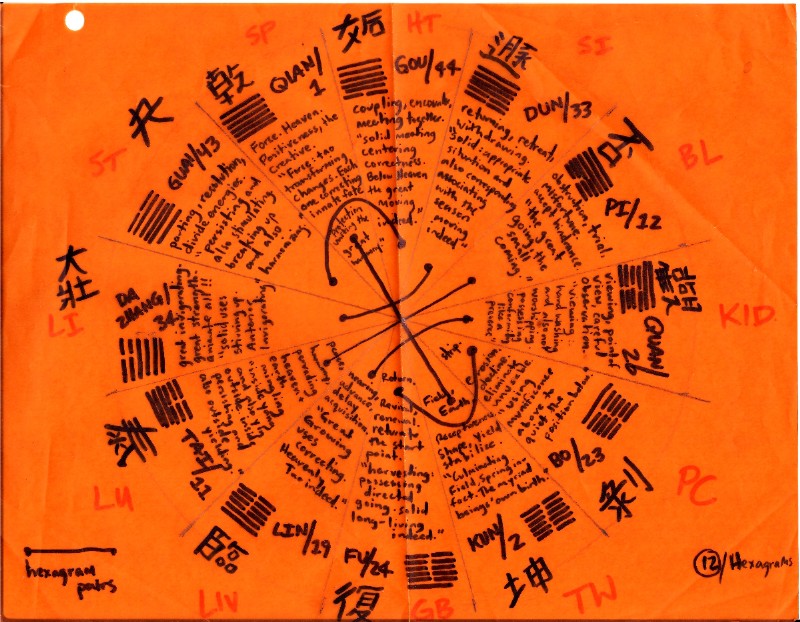 Alert : This is a reposted article from previous versions of the website. I’ve kept it up in mostly unmodified form as people have found it helpful. Newer content may be more complete, accurate, or may represent more matured theoretical and clinical understanding on my part. Proceed accordingly.

Ancient Chinese language and culture honored and centered symbolic and correlative thinking. This tendency is reflected, naturally, in Chinese medicine. A frequently referenced container for symbolic medical thinking is the Chinese medicine organ clock. I have been fortunate to learn about this idea, also called a holomap, by one of the foremost Chinese medicine scholars to delve deeply into the organ clock – Heiner Fruehauf.

First, what is a symbol?

A symbol is something perceivable to human beings that “points towards” something less perceivable – a concept, a group, other minds, other realms. Mostly, we think about human created symbols like language or arrows on signage or, perhaps, religious symbols like the Christian cross, intended to remind us of not just a person, but a whole set of commandments and ideals.

We can extend this concept. We can consider the “symbols” of nature – the browning at the edge of a leaf, the half muddy track in the sandbar, the ripple of the water indicating the passing of fish, and so on. You can extend this to the symbols of a patient’s body during diagnosis, or the symbols one might read in a social situation in order to navigate it better.

When we think about this larger idea of symbols, it can become overwhelming. Is everything a symbol? What’s it all “pointing towards?” Fortunately, vast amounts of symbolic information in a given area is usually divided into more manageable chunks by groups of people seeking to use that information more effectively.  In Chinese medicine, various models or containers have been used to organize and help us find greater meaning in the symbols we encounter.

The Chinese medicine organ clock, or holomap, is one of those models.

This model divides phenomena into twelve portions, like the Western zodiac, with each portion relating to a huge variety of different types of information, meshing it all into a systematic set of interrelationships that can be used in a variety of ways, clinically and otherwise. To get a sense for the basic layout of the organ clock – see my challenged artistry below.

Note: Focus on the general picture as some of the elements will not be explained right now (such as the constellation names “Wie, Mao, Bi,” etc).

A cursory examination will show you that the organ systems are placed around the holomap in the order of the flow of qi through the channels.

There are a lot of pieces of symbolic information that come in twelves and those are correlated in turn around the Chinese medicine organ clock.

A few of the 12 fold groupings:

We can also overlay information onto the twelve-part Chinese medicine organ clock that comes in other multiples including (but not limited to):

Just imagine drawing several circles on tracing paper, one divided into twelve parts, one into eight, one into six and so on. Then imagine putting a representation of each piece of information in the correct section. When all of this information is put together, one begins to understand the complexity of the organ systems.

For example, take the Heart. The Heart is the sovereign of the human body, keeping view and regulation of other organ systems so they may work together in harmony. Using the organ clock we see that the Heart (only a partial list):

So, the Chinese medicine organ clock becomes a tool that helps us gain a more nuanced understanding of each organ system.

By looking for other correlations, understanding each of them, and considering their interrelationships, we can build knowledge that will help our patients.